First day back to classes, and I’m sitting here in the computer lab staring at my notebook, trying to figure out which of my stories that I want to work on. I have the (physical) notebook for Ashes with me, but I’ve got an older work pulled up on the computer. It occurs to me that I have four or five open stories that I’m working on, two semi-solid ideas floating in my head, and a couple of Dragon Age prompts that I’ve considered taking on.

What I’m (actively) working on:

Opps. How did this even happen?

I love all my stories dearly, I just get distracted very easily. Once I get an idea into my head, I latch onto it. And, in all honesty, I never really put any of my stories aside. All of the documents are there in their own neat little folders, waiting to be worked on. The only one I haven’t really touched recently is Nuit, which was my Nano10 work. I think. Curse was finished, but then my laptop exploded.

Someone had to learn the hard way about what can happen when you don’t back up your novel to more places than just a computer. Most of it was saved, but the ending (the ending of all F@&%$!G things!) was lost. I still haven’t written the ending back out yet, because, surprise surprise, I want to change it. I don’t think it sounded good enough.

No, seriously. I’ve turned in papers like that. The last one didn’t even sound coherent to me. All I know is that there was something in there comparing a line in Frankenstein to a line in the Nicene Creed. I think.

I got an A+ on the paper, just throwing that out there.

But I’m really hard on myself when it comes to what I’m writing. That’s what makes nano such a challenge for me. It isn’t the word count. I can, and have, done that with little problem more than once. It’s the fact that I’m never satisfied with what I get down. I write two lines, and I’m tempted to erase all but a few words because I think they sound awful.

In reality, they usually don’t sound that bad. I’m aware that I do have some talent as a writer. I wouldn’t do so well in my classes if I didn’t, but it’s hard to recognize that when I’m actively working on a project.

And it isn’t limited to writing. I do the same thing with any creative thing that I work on.

I have insanely high standards for myself. There are very few people who can ever be harder on my writing than I am, personally.  There is seriously nothing that I don’t criticize when it comes to my writing.

So this is an ongoing fight with me. It’s one of the reasons that I have so many open stories that I’m still working on. Ashes and The Witch Queen both have outlines. As in completed, beginning to end, outlines. So those two are my first goal.

Of course, I edit outlines. Seriously. I even edit and criticize my outlines. No joke.

Anyway. That’s my goal for the New Year. I don’t make resolutions, because I’m not the type of person to do them, but that’s a goal for me this year. I want to finish some of these stories.

I also want to try and update my blog more. Hopefully, one goal will influence the other.

So, I’ve been working on The Witch Queen’s War again. I had shelved it during NaNo last November, but I suddenly had some inspiration, and have about 5,000 words written down on it. I’ve also done a few sketches for my own reference, and figured I’d share a little bit. 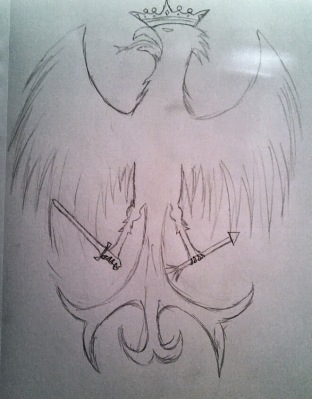 Tiernan’s seal. Not the best I’ve ever done, but it works. I used the Prussian eagle for a general reference.

Once the girl was gone and the door closed behind her, Eirian stared at the envelope. She had recognized the seal as soon as the girl had held it out: a crowned falcon with wings outstretched as though soaring upwards, with a sword and arrow clutched in either set of talons. It was the seal of the Commander of the Royal Army, her older brother, Tiernan…

I know this will sound sudden, and I know that you will be far from pleased to read this, but I have nowhere else to turn; believe me, I have exhausted all other options.

Sister has fallen ill. It began about a month ago now. Small things at first, nothing   more than minor inconveniences. But things have progressed. She has become all but bedridden, and even that becomes more and more likely by the day.

The Healers are mystified. They can find nothing wrong, and yet her health continues to decline a bit more every day.

Please, Eirian, come home, if only for a time. I have a request for you that I don’t feel is proper to make any way less than face to face. I know that you and Gwen have had your differences, to put it lightly, but I beg you to put that behind you for now.

Gwenlyn needs your help, and so do I. Please, Eirian. You know that I would never ask unless I didn’t think it absolutely necessary.

I have instructed my messenger to wait for your response. Please hurry, Eirian. I need you to come home.

Slightly later in the same chapter:

Eirian would never forget the horrified look on her mother’s face when she had told the late queen about the noise, not matter how hard her mother had tried to mask the expression. After that, her Seniors, and everyone else in the palace, had begun watching her even more closely, as though they expected to walk into her bed chamber one morning and see a demon sitting in her place in the bed. Maybe they had.

“They attract demons,” was what she remembered hearing said to her mother. “They’re gateways for demons to gain entrance to our world.”

Eirian had heard them. Grown men, frightened of a child’s potential.

So that’s what I’m working on right now. I haven’t forgotten about other things that I’ve started, like some more recommendations, but when I’ve got inspiration for my personal writing, I run with it.

So, the Biology Exam From Hell is over and done with, and now I can look ahead to November and work on fleshing out new characters.

Yeah, I decided to go with a new project. I had one all planned out at the beginning of this month, and will probably still work on it, but I’ve decided to make this one my main goal for the month.

This story has its roots in a project I originally started for CampNaNo, in June of last year, but ultimately scrapped due to time and lack of interest. After retooling the setting a bit, I’ve decided I’m going to use the characters in this new setting, since they never went anywhere last time.

This is only the second time I’ve really dipped into the Fantasy genre, but I enjoyed it last year. But I think this year’s novel will have a stronger plot. I liked the characters from last year, and the setting was good, but it wasn’t the tightest plot.

Okay, so it had a pretty loose plot.

Anyway, on to this year’s summary:

“A debt paid with blood… Humanity for power…” 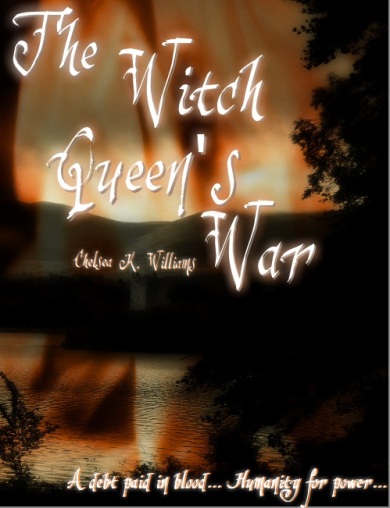 War is threatening the Kingdom of Inverna.

The quick-tempered third child of the beloved Queen Caoimhe, Lady Eirian cared nothing for the royal court, preferring to devote her time to archery, magic, and the healing arts. At seventeen, with a cunning mind and a quick tongue, some wished to see Eirian as the Queen’s successor, rather than her sister the Crown Princess Gwenlyn.

She is a Black Mage, feared for her abilities to control not only elements and healing like other mages, but minds and bodies, as well. It is not an unfounded fear: many Black Mages have sacrificed their blood to demons, giving mind, soul, and sanity in exchange for power.

Years later, while tending to bureaucratic affairs in her families Province of Blackwater, Eirian is called home when Gwenlyn, now Queen, falls ill to a sickness no Healer can cure. To make matters worse, old enemies see the Queen’s sickness as the perfect time to launch an attack.

With the kingdom on the verge of war and her sister’s health deteriorating, Eirian must navigate the poisonous waters of the Royal Court and find a cure for her estranged sister, all while attempting to stem the tide of war and avoiding the whispers of those suspicious of her powers.

With the weight of a kingdom pressing down on her shoulders, Eirian’s resolve weakens. A demon’s power becomes a tempting promise.

Can she survive the trials on her own? Or will she succumb to the burdens of her position and give in to the demon’s offers?

Not too bad, at the moment, but I’ll probably go in and do some editing on it before the month is all said and done.

The Kick-Off Party for the region has already been planned, and I’m getting excited. Every year that I’ve done NaNo, I’ve always just wanted to start writing. I’ve got so many ideas that I want to get them down on paper and flesh them out. I may start filling word prompts with characters from previous years.

Speaking of previous years, the updated NaNo site is finally allowing people to re-post their novel information for years prior to 2011 when they did the major site overhaul. I wound up going back through my Livejournal (remember when LJ was actually legit and not almost constantly down for another DDOS attack “maintenance”?) to hunt down the summaries that I couldn’t seem to find anywhere else. I had forgotten that I actually really did like those stories. I didn’t cringe with every sentence I read.

And I’ve actually gotten far better at summarizing. Yeah, I have a hard time believing it, too. The “summary” of my 2010 Novel, Nuit de Glace, was about a page long. (I’d pull a piece of it and put it up here, but, surprise, surprise, LJ is down.)

But it was good!  I liked it. Ask anyone who’s listened/watched me self-edit. That hardly ever happens. I love writing, I always have, and I write mostly for my own enjoyment. But I’m a perfectionist. Writing or drawing, I want it to be perfect.

Yeah, I’m one of those odd people who seems to enjoy the editing process. I don’t know why. I may sort through the summary and some of the printed parts I’ve got and post them on here later. Lots of things to do.

Also, I just realized that I’ve had a Fanfiction.net account for 7 years now. I feel old…